“…Aaron Atwick proposed a single metagene,” said Professor Marigold, “but we now know that there are over a hundred genes that can grant superpowers. Some of them activate during puberty, triggered by changing hormones, as Ms. Kennethson’s did,” She gestured to Nellie Kennethson, our class’s representative of the 15 percent of the population who had superpowers – Nellie’s hair and eyes could change color at her whim. “Many others activate during adrenaline rushes. Some are activated by radiation. A few are even active from birth. It’s part of why powers are unlikely to ever reach past 15 percent of the population – only around 15 percent of people are ever in a position where their metagene is activated, even though almost 85 percent of people now possess at least one metagene. Does anyone know if they have a metagene?”

I dutifully raised my hand. “I was tested once,” I said. “I’m one of the 15 percent that don’t have any documented metagenes.” Learning that when I had had the opportunity to take a test that detected them a few years ago had been a bit of a blow – like most people, I had harbored a childhood dream of having incredible superpowers and becoming a great hero. My drive to become a doctor was, perhaps, borne of that childish desire to help, now with a goal I could actually attain.

“I have one that can activate from adrenaline!” volunteered Todd Brickler. “That’s why I got into skydiving – I hoped it would give me powers. No luck yet though.”

“I have three!” Sarah Finely said proudly. “One of them is from radiation, but no one knows what would trigger the other two for sure!”

Professor Marigold held up a hand to forestall anyone else from volunteering. “I hope I’ve made my point – dormant metagenes are more common than active ones. Not to mention the relative scarcity of magical and cosmic powers, which aren’t granted by metagenes.

“Now, like most things relating to superpowers, these categories are approximate. There are those who argue that metagenes simply allow one to instinctually channel magic, thus breaking the laws of physics. There are those who suggest that cosmic sources actually just activate dormant metagenes – perhaps unidentified ones, but still the same type of power. There are even arguments that magic is simply sufficiently advanced technology, and that magic should therefore fall under cosmic – or that all three sources should be merged, as there’s little meaningful distinction between them. After all, there are magical metahumans with no need for chants or signs, natural metahumans who must interface with technology, and cosmic metahumans who use hand gestures or mantras to help focus their power.

“Your homework, then…” Marigold paused to let us all groan, grinning, then continued, “your homework is to write a short paper – three to five pages, due next week – explaining why you believe two of the three sources are the same or why you believe they’re different. Everyone got that?”

That shouldn’t be too hard, thankfully. My mother had studied metahumans, after all – I was sure I could find something in her old papers that would help.

The professor glanced at her watch as we wrote our homework down. “And that’s four o’clock, so I’ll see you all next week. Make sure you write those papers!” Typically she strode out of the room at that point, but this time she stayed, allowing the students to vacate instead. “Mx. Kaufman, would you mind staying behind a moment?”

I furrowed my brow as the rest of the class began to leave. What did she want to talk to me about? I didn’t think I had screwed up during the class. I had spoke up once before being called on, but she had asked for input from the class and I hadn’t been the only one. I had even been engrossed enough in today’s lecture that I hadn’t doodled in my notebook today, although I usually did. We hadn’t had any homework due to her today, and –

“Quinn,” Marigold said to me with a somewhat sad smile. “I heard about your father. I just wanted to express my sympathies.”

“Oh,” I blinked up at her, then laughed, running a hand through my hair. “Thank you, professor, but he’s fine.”

She raised an eyebrow. “He’s in the hospital again, isn’t he? I know I’m not incredibly close to David,” she said with perhaps a slight pang of bitterness in her voice, “but he is a co-worker, and I don’t think the inter-departmental gossip is that inaccurate. We do work in the same building, after all”

I shrugged dismissively, starting to pack up my things. “I mean, yeah, he’s in the hospital again, but, well… it happens from time to time. Chronic illnesses will do that to you.”

“Not especially,” I told her. “Dad’s beaten it back before and he’ll do it again. It’s not even the worst relapse he’s had. He’ll be out in a few days, I’m sure.”

She examined my face, obviously still concerned, so I made sure to smile reassuringly. I didn’t know what she was so worried about – Dad had been in and out of the hospital for years, and his current relapse wasn’t anything new. “Well, if you’re sure,” she finally said. “Still, please pass on my sympathies to him. If you need an extension on that paper, just ask.”

I rolled my eyes. “I’ve got it covered, professor. I was able to keep up in your class during midterms for Organic Chemistry and Abnormal Anatomy, I think I can handle one week without my dad to interrupt me when I’m doing homework,” I joked. “I’ll be fine.” I gave her a smile and left. As I went, I gave a nod to Todd Brickler, who had been standing by the door.

“What was that about?” Todd asked we left the room – he seemed to have been waiting for me, as he fell into step with me when I passed through the door.

I wasn’t sure why – we had worked together on a group project the previous day, it was true, but I didn’t exactly consider him a friend. Maybe my nod had given him the wrong idea. Still, I didn’t see any reason to be rude, so I answered, “She was asking about my dad – he’s in the hospital.”

I sighed. Honestly. “Yeah, he’ll be fine. It’s just a chronic thing that flares up every now and then.”

“Still. How did she know, though?” he asked.

“He’s a professor here as well,” I said. “He teaches poetry and literary analysis, most years. I think he started around the same time as Marigold?”

“Oh, neat,” Todd said, although from his tone I didn’t think he actually thought poetry was cool. “I guess you must be from around here, then?”

“Yeah, we’ve lived in New Venice since I was… seven, I think? We moved not long after mom…” I paused, unsure how to explain that my mother had been missing for most of my life. “Well, dad couldn’t support us just by raising me,” I eventually said.

“I guess you’re probably not staying in a dorm, then?” Todd asked. He tactfully didn’t press on the subject of my mother, for which I was grateful.

“Yeah, I’m still living at home. No sense spending money on a dorm when you don’t have to, after all.” It might have contributed to me not having many close friends at college, I supposed, but on the other hand it wasn’t as though I had a huge amount of time on my hands. I was handling it fine, but biology was a demanding major, particularly as I was planning to get a medical degree as well.

“Must be a bummer to have your old man around all the time, huh?”

“Nah, dad’s cool. We get along pretty well.”

“He doesn’t get upset when you bring guys home?” Todd joked.

“I’m single right now, actually. But no, he’s never minded me bringing boyfriends or girlfriends home. He likes to try and embarrass me when I do, though.” What was Todd getting at?

“What, you’re single? How could a girl as gorgeous as you be single?” he asked.

I blinked in surprise, then narrowed my eyes at him. So that was what he was getting at. “I’m not a girl, Todd,” I informed him – I was very open about the fact that I was nonbinary, and while it wasn’t always worth correcting the assumptions people made in one direction or the other, in this case I thought it was. “And yes, I’m single, but that doesn’t mean I’m interested in you.”

It was blunt, but sometimes that was the only way.

Metahuman History was my last class of the day, so after that awkward conversation I was able to head home. Normally I would hitch a ride back from the university with my dad, but with him in the hospital it was public transportation. The busses in New Venice weren’t what I would call fast or reliable, but I should still get back home in time to check on the stew that I had set up before going to college for the day.

In the meantime, I decided to start sketching. My notes for today had only taken up three quarters of the page, so I had lots of room in the margins, and, glancing up on occasion for reference, I began sketching the city’s skyline. After a few minutes, I noticed a figure bounding between the rooftops – bright white costume against the sky, with a billowing red cape – and I couldn’t help but smile. Canaveral, my favorite hero of the New Champions, was on patrol today.

I added him to my sketch. 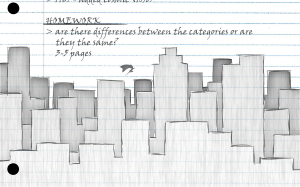 Not long after that, the bus arrived, and I had to return the notebook to my bag – no point sketching in a jerky bus. Instead I retrieved my notes from the morning’s Abnormal Anatomy class and began rereading them while I waited for the bus to take me home.

If you enjoy my writing, please consider sponsoring me on Patreon. If you can’t afford a recurring donation, you can make an individual donation through Paypal, or purchase one of my books. You can even support me for free by voting for Paternum on TopWebFiction every week. The more I make from my writing, the more time I can devote to it, which will improve both the quantity and quality of my work.

This site uses Akismet to reduce spam. Learn how your comment data is processed.

Paternum updates every Saturday morning at 10am EST. The first chapter can be found here.

Please support Paternum by voting for it on TopWebFiction once a week.

You can also help support Paternum by reviewing it at the WebFictionGuide or on RoyalRoad.

If you’d like to help support my writing monetarily, you can donate through PayPal or join my Patreon.

To discuss Paternum or my other stories, feel free to comment on chapters or join my official discord server.

I queue posts in chunks after finishing and editing them, so chapters will not usually be queued immediately after being written.